Tracking systems work by tracking electronic “tags”, which are attached to or integrated into objects. A tag can be a complete device or a circuit in a device. There are two stages of tracking: a tag finding its own location and the tag wirelessly sending its location to the network. The wireless equipment receiving the location data is called a “station”. 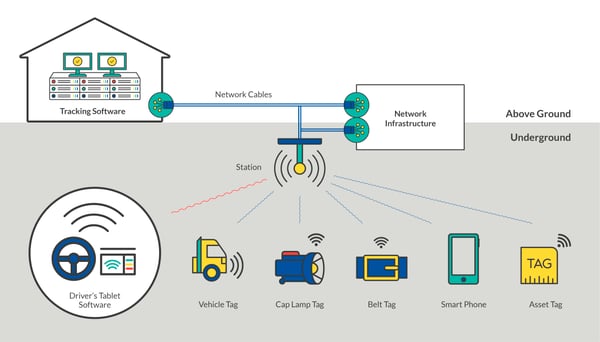 Stage 1:  How Tags Find Their Locations

The location of a tag can be found using various methods in underground mines.

Stations are mounted on walls, so their locations are fixed. A station will search for all nearby tags and the ID of every tag within its “signal range” will be sent to the network with the same location as the station. This signal range decides the “location resolution” of tags, which is the radius of a signal. The space within this circle of radius is the range of possibilities of the tag’s location. Station Cell is the most fundamental method of tracking and has the least accuracy. Most other tracking methods compliment Station Cells and improve its accuracy. 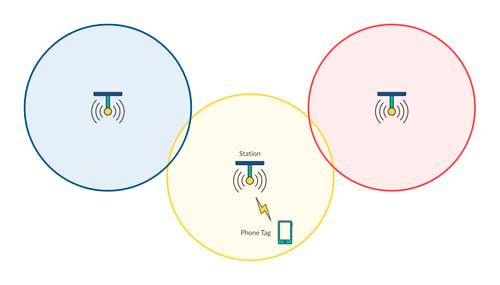 When a wireless device receives a radio signal, the signal strength can be measured and the tag-station distance can be estimated based on the signal strength. The stronger the signal, the closer the tag. However, this tracking method is unsuitable for very long or very short distances due to Inverse-square law. For example, Wi-Fi has a signal range of 50-100m, so it is suitable for range estimation with signal strength. About <20m accuracy of the tag-AP (Access Point) range can be achieved through Received Signal Strength Indicator (RSSI).

Radio signals transmit at the speed of light. By multiplying this fixed speed with the signal propagation time, the distance can be calculated. This tracking method is called Time of Flight (ToF). The propagation time used in the calculation can be either one-way or a round-trip.

In round-trip ToF, the transmitter sends a signal to the receiver, then the receiver sends it back. The transmitter can decide the signal propagation time according to the times it sent and received the signals. However, receivers are electronic devices and there is always a delay between the time it receives a signal and the time it sends a new signal back to the transmitter. This delay is called “latency”. Low latency, or at least confirmed latency, is a basic requirement of round-trip ToF. 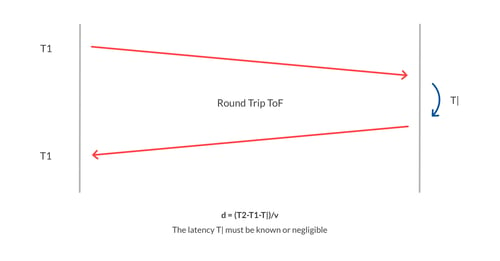 Wi-Fi standard was developed for broadband communications. Fundamentally, it is not suitable for tracking due to its short range, poor roaming and long latency. However, Wi-Fi is the most popular wireless system in underground mines, as almost every mine has some Wi-Fi coverage. Presently, NAP plus RSSI is used for tracking. However, new Wi-Fi standards significantly improves latency, making accurate ToF possible.

The main disadvantages to Wi-Fi ToF are costs and availability. Only APs and tags in the latest standards can be used for ToF ranging. They are expensive, have high power consumption and are not used in most mines. Currently, there are no Wi-Fi tracking systems based on ToF. Nevertheless, for modern mines with the latest APs deployed, Wi-Fi ToF is a very promising choice.

UWB has very low latency and an impressive 1m tracking accuracy. Currently, there are a lot of studies on UWB technology for Collision Avoidance System (CAS) in underground mines. It makes financial sense to continue using the existing UWB infrastructure for location tracking with minimum additional costs.

Where cellular network is not available, DSRC is an effective choice for ranging due to its low latency and maturity. Currently, DSRC On-Board-Unit (OBU) has high power consumption, so it is only suitable for vehicle tracking. However, portable power saving OBU modules are under development. The world’s first DSRC Cap Lamp is scheduled to be released at the end of 2021. The main disadvantage of DSRC ranging is cost. Both OBU and Road-Side-Unit (RSU) are much more expensive than most other wireless equipment. This drawback is further compounded by the fact that DSRC is losing popularity to C-V2X.

Beacons are wireless devices mounted on walls. They periodically broadcast their device ID. Any tag within the beacon’s signal range will receive this signal and send the beacon ID to the station. Since beacons and their locations are fixed, the tag location can be determined by the nearest beacon. Beacons must be battery-powered, waterproof, ragged and easy to mount, making them suitable for underground mines.

A tag used in this tracking system has two wireless modules: one for beacon-tag link and one for tag-station link. They usually use different technologies. The tag-station link is explained in the next chapter.

Bluetooth is the most popular beacon standard for beacon-tag links because of its short signal range, low power consumption, popularity and low cost. The accuracy is dependent on beacon separation. Typical separation of Bluetooth beacons is 20m. Signal strength of the Bluetooth signal can be used to further finetune the tag location.

There are several disadvantages to the beacon ID method. Firstly, mines need to install a large number of beacons. Secondly, they are easily damaged and require constant maintenance and considerable repair costs. The most significant disadvantage, however, is battery replacement. Beacons are in sleep mode most of time to conserve battery. They wake up after a set period of time to send signals before sleeping again. The typical beacon battery life is over 3 years.

Dead-reckoning is a technique for estimating the current position of a tag based on its heading direction, speed and duration of travel from a past position. No calculation can achieve perfect accuracy. When this process of “from past position to decide current position” is repeated, errors are accumulated. Eventually the margin of error will be too large, making it unusable. Therefore, it is necessary to calibrate the location to clear the error with a process called “initialisation”. Dead-reckoning is widely used above ground, because GPS signals can be used for initialisation, however, GPS signals do not exist in underground mines.

Inertial Measurement Unit (IMU) is the most common component for dead-reckoning applications. Normally a proximity device can be used to initialise the IMU when the tag is within its proximity. It can be an independent device or be integrated in a station or a beacon. Dead-reckoning is currently not used for underground mine tracking. However, since IMUs are already used in underground mines for other purposes, it would be convenient to use them for dead-reckoning location as well.

Lidar has attracted a lot of attention in recent years. They provide precise IDs for location tracking. It shows great potential for various applications in underground mines, such as automation. However, Lidar equipment are expensive, large and heavy. They may not be suitable for tracking only. Nonetheless, once Lidar infrastructures are in place for other applications, adding vehicle tracking would require minimal additional costs.

The above methods are normally used in combination with each other rather than used individually. For example, signal strength of beacons can be used to further fine-tune the tag location on top of beacon ID.

Wi-Fi is the most popular tracking technology for underground mines today. This is mainly because it is widely used for intranet and internet connections. Another reason for its popularity is its signal range. NAP plus RSSI can give 20m accuracy, which is satisfactory for most mines. Consequently, mines do not need to spend much extra on infrastructure to implement Wi-Fi tracking.

There are also third-party tools for Wi-Fi location services; for example, Cisco MSE with Location Engine. This location tool not only calculates location, but also helps with location related analysis, such as tracking the exact time personnel enters or exits a room.

Cellular networks have been introduced to underground mines since 2G. Today, 5G is on trial in some demonstration mines, while the most practical cellular network for underground mines is still 4G, in particular, LTE. In a standard LTE network, a base station and Bi-Directional Amplifiers (BDAs) are deployed along tunnels. A cellular network cell is too large, so accuracy will be low for location tracking based on station cell. It is also too long, so accuracy will be low for range estimations using signal strength. Therefore, a large number of beacons are normally installed in conjunction with cellular networks. Beacons can be integrated in BDAs or individually mounted on walls. A typical combination is the LTE-BLE (Bluetooth Low Energy) solution.

Long Range (LoRa) is the most promising Low-Power Wide-Area Network (LPWAN) technology for Internet-of-Things (IoT) applications in underground mines. It has very long range, low power and low cost. Additionally, the independent network structure makes it suitable for underground tracking. Similar to other WANs, beacons must be deployed for location IDs. LoRa Gateways, which are used as stations, can be separated kilometres away from each other or installed on every corner of tunnels. Currently, there are no commercial LoRa tracking systems for underground mines. However, we can expect to see them in the near future.

ZigBee, Bluetooth and RFID are also used for underground tracking. They are out of favours today but still in operations in many mines.

All early tracking systems use proprietary radios. While they are certainly outdated, they are still, however, in operation in many mines.

Signal extenders are antennas with a long cable or leaky feeder cable. They can be installed in uncovered areas with cable connection to a station. However, the signal area of signal extenders belongs to the cell of the station they connect to. Therefore, tracking systems based on station cell location cannot pinpoint whether a tag is near the station or in a distant location covered by signal extenders.

An AP in a Wi-Fi system can use a directional antenna to form a long-range AP. This method can potentially extend the signal range to more than 1km and reduce costs by more than 90%. However, the disadvantage is that it can cause a phenomenon called “Hiding Note”, which causes serious medium access collisions when multiple wireless devices are trying to transmit signals in the same radio frequency. Australian researchers are attempting to fix this problem. Hopefully, they will achieve the world’s first long range AP for underground mining applications.

In most standard wireless networks, tags can only communicate with stations. However, if the wireless technology in a tag has mesh network capability, tags can communicate each other, allowing tags to be connected in a chain of links to extend radio signals beyond the station coverage.

Australia is already recognised as a world leader in industrial and mining safety standards. In...
Read More

IECEx or ANZEx certification is compulsory for miner’s cap lamps for all underground coal mines,...
Read More
Home
Contact us
Get Quote